A quick update to the EmuMovies Commodore 64 Video Snaps set adds 132 new video snaps. Thanks to Wiggles and Plastron for the submissions.  The set is now at 1,043 videos in total 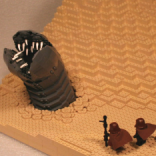 This is a set of frontend video themes intended to be used with arcade genre-based playlists.  The genres correspond roughly to the "All Killer, No Filler" playlists compiled by BadMouth and the ArcadeControls forum community:

I designed the logos and edited the audio/video collages,  but much credit and many thanks are due to the EmuMovies community, HyperSpin community, and CriticalCid for creating the game-specific video themes and capturing all the gameplay footage. The videos also use music from some of the games featured in the video collages, so credit is due to the original developers and composers as well.

Clear logos for these genre playlists are available here.

You can see a preview of the videos below on YouTube.